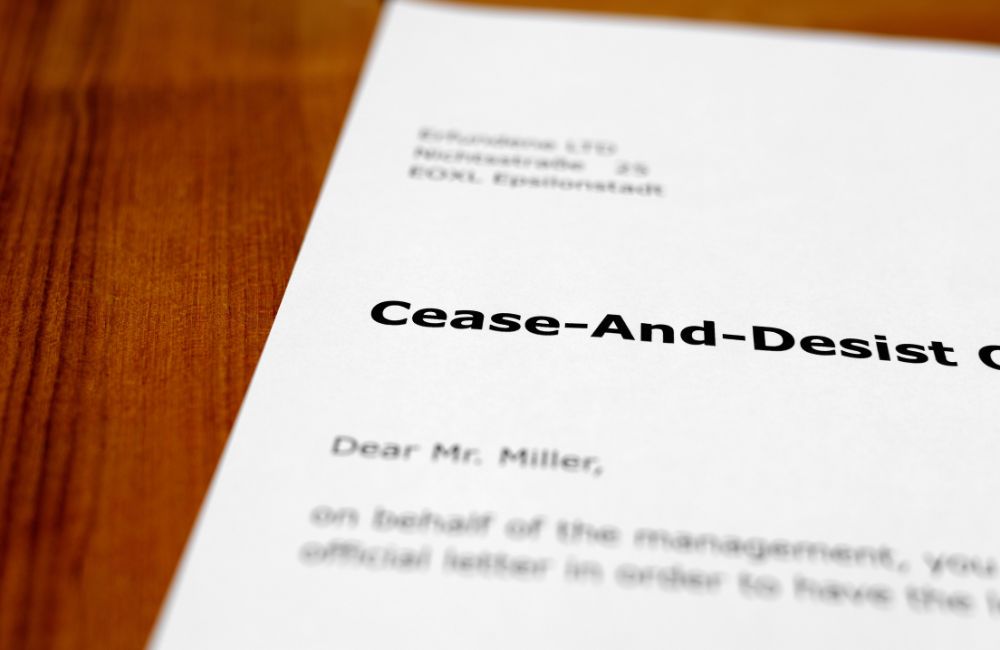 A patent owner has sole ownership of his patent invention after the patent application has been granted. Thus, he has the right to take legal action by filing a patent infringement claim on the use, production, selling, or import of his patented product.

The patentee has a few options before filing a case for patent infringement. He can send a cease and desist letter to the alleged infringer informing, warning, or offering details on the fees of using his patent. How the patent owner chooses the word the letter or specifies future action depends on him. The letter only serves as the first step towards legal action for future proceedings between the patentee and the accused infringer.

The cease and desist letter has no legal standing but can be used as evidence in patent litigation to show that the accused was made aware of the infringement. In reply, the alleged infringer can choose to file a Declaratory Judgment Action which takes the case to court preemptively before the patentee can file his case.

Therefore, any communication in the form of a cease or desist letter or notification should be taken with care, keeping the legal ramifications and potential outcomes in mind. It is important to note that a patent owner can recover damages for patent infringement for six years prior to the date the lawsuit was filed, with the earliest date calculated from the patent issuance date. That is unless the patent owner wishes the date to be on the earlier filing date of the provisional patent application.

The outcome in such cases depends on the correct handling of communication between the patentee and the potential infringer with the help of a qualified patent attorney and knowledge of the US patent laws.

One such law is the Equitable Estoppel Doctrine which protects one party from exercising their right against another because of misleading actions. This could prevent the patent owner from getting damage claims or an injunction and even invalidate the lawsuit.

The following case shows the consequences of sending a cease and desist letter and the ensuing application of the Enstopel Doctrine.

Apex Eyewear sued Clariti Eyewear for patent infringement. Apex had sent Clariti a cease and desist letter before the initiation of the lawsuit, notifying them of their patent ownership and potential infringement. Following the letter, Apex did not send any more communication to Clariti for three years.

Clariti filed for dismissal of the lawsuit on the grounds of the Enstopel Doctrine. The Court granted the dismissal, stating that the patent owner misled the accused and that the patent would not be enforced by not sending any further communication after three years. The Court held that the alleged infringer based his actions on the actions of the patentee, and because of this, the accused has been materially prejudiced if the patentee was allowed to move forward with the infringement charges.

The above case shows how sending a cease and desist letter and not following the communication with the correct legal actions can enforce the Enstopel Doctrine. This is why all outcomes of the patentee and alleged infringer must be carefully planned with all potential outcomes taken into consideration to avoid invalidity of patent infringement claims.